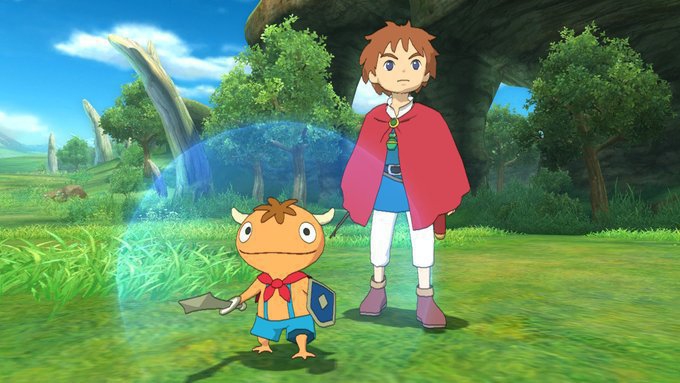 I’ve been tempted by “Ni No Kuni Remastered: Wrath of the White Witch” on the Nintendo Switch for sometime but at £50 I couldn’t justify another JRPG to add to the backlog, even if the animation was by Studio Ghibli. But until 01-Nov-2020 the download is available at 83% off in the Nintendo UK store - and I believe in other areas too. At £7.99 I couldn’t resist…

Five hours into this 40+ hour game and I’m finding it very enjoyable, humorous, surprising in parts, but not quite in the same class as Dragon Quest XI.

The animation is by Studio Ghibli and the first half an hour feels very much like watching one of their movies. Going by the style of animation and age of the main character I was expected a cute story and a simplified RPG mechanism, but I was soon dissuaded of that when early in the game a tragic event hits our hero with more realism than I was expecting.

The battle mechanism is an interesting combination of action and turn-based RPGs with a strong hint of Pokémon thrown in for good measure. Most combat is carried out by a “Familiar” that you throw towards your enemies at the start of battle. Familiars are creatures you have befriended and it looks like you can eventually carry around a collection of them and choose the most appropriate for a particular battle. They level-up in usual RPG fashion and can learn various “tricks” which cost MP. It sounds familiar, but that is no bad thing. 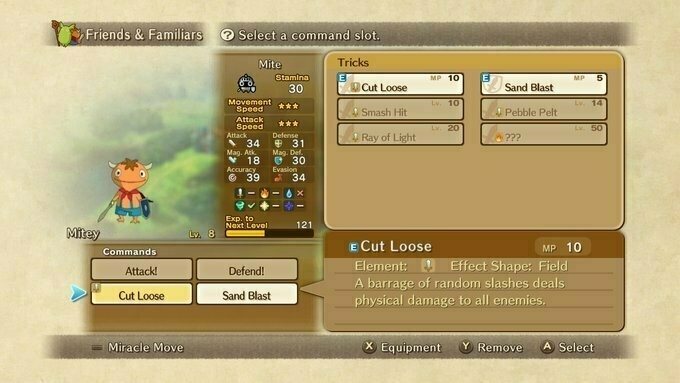 Leveling up is simplified, but there is still adequate stats, affinities, and equipment slots to keep things interesting. Of course the main character and his familiar start off with basic equipment and they have to buy or capture upgrades as they make their way through the adventure. Going by the sections in the “Bottomless Bag” there is also a crafting element, though that has yet to be introduced.

The main story is interesting, with some unusual ideas, and there are plenty of side quests in each location. Though the side quests do seem to mainly be of the “go and find three of these and bring them back to me and I’ll give you a present” variety. A “Wizard’s Companion” book, Creature Compendium and Progress report add around 700 screens of background information to the story, so there is plenty to keep you amused.

The visuals are beautiful with a detailed world to explore, but compared with Dragon Quest XI the Ni No Kuni towns have much simpler maps and there are few buildings you can enter. Approaching the door of a building results in 2 or 3 seconds of black screen before you are suddenly in the centre of the one room the building contains. But most jarring is that the hero has no ability to jump or climb, so a barrel at the bottom of some stairs is an impassable barrier and streets are just a row of house fronts without rooftops to explore. While in Dragon Quest XI it was easy to suspend disbelief, in this game the hero is repeatedly blocked by simple obstacles he should be able to jump over.

Normally “Ni No Kuni Remastered: Wrath of the White Witch” is £50 for the download and typically £30 for the cartridge. At that price I think Dragon Quest XI creates a noticeably more immersive world. But at £7.99 “Ni No Kuni” is a bargain, and I’m looking forward to another forty hours or more of great battles and amusing story.